Every story has a beginning and so it is with mine, though I’m not really sure where it starts. I grew up in the UCC but do not remember ever hearing of Blowing Rock Assembly Grounds. I truly don’t remember when I first heard of it, but I can tell you that once I did that it was all about relationships and connection to the people there. That has continued now for many years.

I became involved with Johns River as a camp counselor at age of about 25. During that time, Ken Clapp, the Executive Director of BRAG, would come to Johns River to cook for the campers. I cannot remember if I knew him before that time. I became more and more involved in Outdoor Ministries, and we became friends and co-led some travel camps together. I think this led me to “the Grounds”.

The relationships began. There, I met Margaret and Marty Bray, who remain friends today. As the president of the Johns River Board, I attended the “BRAG” Board meetings as a non-voting member. Through that I met Bob Reece and many other long-time supporters of Blowing Rock. I found myself becoming more and more connected to “the Grounds” and to the people there.

In 1994, I returned to graduate school at ASU. Now having becoming in the UCC Outdoor Ministries on the national level, I knew the new Executive Director, Eric Johnson.  This led to a part time position for the year that I was in grad school. It was one of the most wonderful years of my life. It led to relationships with people who impacted my life in positive ways and continue to do so. I was able to help in all areas of the workings of “the Grounds”. I made some lifelong friendships. People constantly confused Martha Shore and I, thanking me for cleaning rooms and her for leading devotions. We just agreed and had our chuckles. People continue to confuse us to this day, and we love. We love it so much that we call each other “Sis”.

Other than the friendships, I became more connected to the site. One of my favorite parts no longer exists—the swings. Those swings were the most therapeutic and inspirational things during my time. I would swing as I looked at the view of Grandfather Mountain. It was often a very spiritual experience for me. Though the swings went to wayside, I still relish standing out back or on the deck and taking in the view of Grandfather. This connection led me to take pride in keeping “the Grounds” alive for future generations. In future years, I helped scrape and paint the ceiling of Mt. Bethel and helped to reroof Rowe Dorm. Today, I continue by coming up to help with the landscaping on occasion—digging and creating beds. Somewhere in this time, I also volunteered at the Confirmation retreats that were once held.

The years have continued. During that time, I have been a part of the Board several times. I was not on the Board when they chose Bill Bourden as the next Executive Director but knowing him from the national level was able to tell the Board President that they made a great selection. Again, I found myself working at “the Grounds”, this time as a volunteer. When Bill first came, I volunteered for him for about three weeks sleeping on a mattress on the floor of Zwingli Cabin. It was home, and I felt that I was at home. My love for the site and the people who visited grew deeper. I will always remember that I learned the Electric Slide in Upper Shuford from an elderly ballroom dancing group that was visiting.

And then came my involvement with Special Days. I do not remember the first time I helped with Special Days or how many years I have helped, but I tell people that it is always the best four days of my year when I am there. I think that it represents what the now Blowing Rock Conference Center is all about—true openness and acceptance of all who come regardless of who they are. It changes lives.

Again, there was a change in the Executive Director, but this time, I was on the Board during the selection process. That process helped me to look at the site from a different perspective—not only what it was but what it could be and who could take it there. Being friends with past directors, employees, and constituents, I heard criticisms as the once “Grounds” became the “Conference Center” and took on a different direction. Ted Wilson came on as the new Executive Director. Again, I found myself on the Board and once again, I found myself volunteering. The relationships were still there with those from the past and those in the present—some still the same. I have literally used a pick ax to till up an area to put a bed in front of Cabin A/B. Can’t say I’d do that many places.

The pandemic put the Conference Center in a different position. What would it take to survive? It would take the leadership Ted has provided. It would take those relationships and connections that have been built over the years. And again, I found myself in a volunteer role. With staffing short, I came up to volunteer in housekeeping and the kitchen. I can say that it was the high point of my summer. Why? Because of the relationships. I was made to feel appreciated as much as taking care of a place that I love. There was friendship, laughter and a connection—a connection to the staff, the place and I think a deep spiritual relationship to God and all that the Conference Center has to offer. When I travel to the Conference Center, I usually take a picture looking out towards Grandfather and post it saying that I’m at my happy place. The swings are gone, some of the people are gone, many things have evolved over the years, but it is and I hope will always be “my happy place”. And as I said, I’m not sure of this story’s beginning, but I know that I hope that it does not have an ending any time soon. 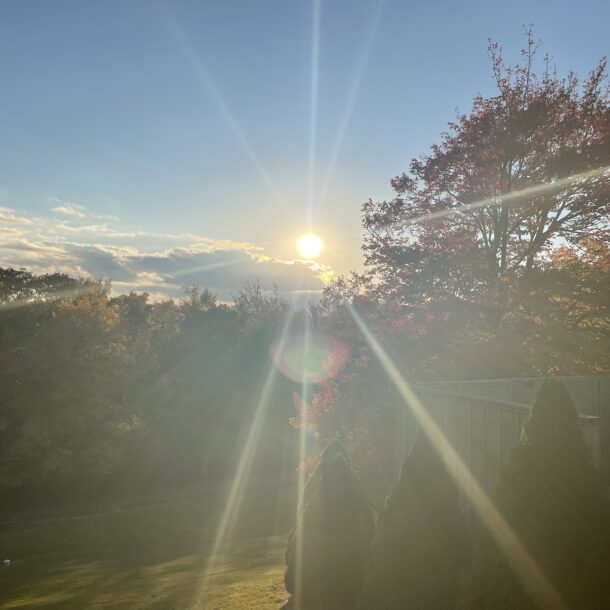